Hoyu Sakuma’s Calligraphy classes appeared in Tama Navi in the leaflet, ‘Let’s BOB’ (Build up the Opportunity of Business)

Hoyu Sakuma’s Calligraphy classes appeared in Tama Navi in the leaflet, ‘Let’s BOB’ (Build up the Opportunity of Business), published by the Services for Companies Section of Tama Credit Union.
Calligraphy lessons for Japanese students and foreign visitors, as well as to prevent dementia.
Currently in application for ‘Minpaku,’ a vacation rental where guests can experience Japanese culture through calligraphy, tea ceremony, and flower arrangement.
Hoyu Sakuma’s calligraphy classroom is open for Japanese students aged 6 and above all the way to adults. Representative Akiko Sakuma (teaching calligraphy under the name Hoyu) also teaches English through ECC. After inviting exchange students from the U.S.A. to Halloween and Christmas parties, she began offering calligraphy lessons in English to visitors from abroad.
Sakuma is also in the process of applying to make two rooms in her apartment complex into ‘Minpaku,’ a vacation rental where guests get a taste of several sides of Japanese culture: not only calligraphy but also tea ceremony and flower arrangement. She finds the lessons worthwhile because people from abroad are so eager to learn about these cultural aspects.
Sakuma is assisted by Osamu Takahashi of ‘Mandokoro’ Family Office Corporations, her business partner and also a manager of her own business. He provides business support as well as IT consultation.
When not in a lesson, the two are making preparations for Tablet Calligraphy lessons which will help prevent dementia for a group of fellow landowners. These lessons will use an application called Zen Brush 2 that requires neither brushes nor ink to create works. Through their efforts, they hope to reduce the rates of dementia in the future.
Caption
Having a cup of powdered green tea in her garden next to the classroom after a calligraphy lesson.
Caption
Rep. Sakuma, who majors in Kana writing, continues her studies by attending seminars by Kosokai where she brushes up her skills. 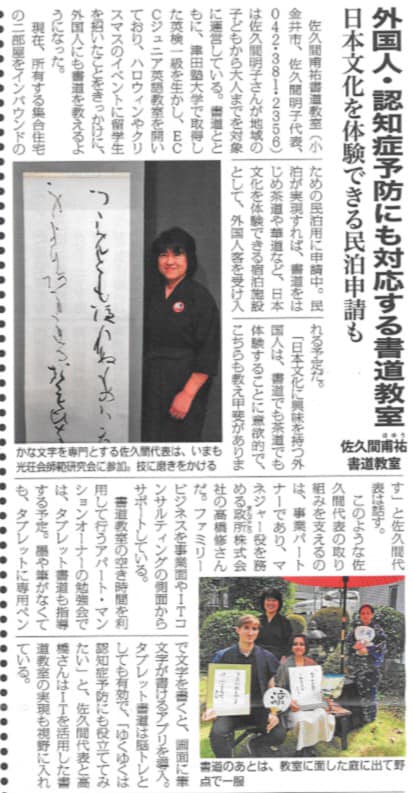 I won a prize of excellence at the 2020 Nisshoten Calligraphy Exhibition. 日書展で秀逸賞受賞