Interview by Masahiro Okada, on his podcast: “The Will of a Proprietor”

Interview by Masahiro Okada, on his podcast: “The Will of a Proprietor”
OKADA: Could you tell me about what you do? What are the contents of your classes?
SAKUMA: I mainly teach calligraphy to Japanese students, but I have also started teaching it to people from foreign countries.
O: So you’re also teaching classes in English?
S: Yes, I’m good at English, and I also teach English language classes.
O: Your foreign students must be pretty satisfied to be able to write the words they choose in calligraphy while they’re here.
S: Yeah, many of them are. Or others aren’t satisfied with what they wrote and want to come back and try again. I also have some regular students.
O: How do you teach your foreign students? Do you teach them by writing a model first?
S: I start by teaching them how to write 一 (1), then 三 (3), and 川 (river), 人 (person), and maybe 日 (sun) to practice corners. After that, they choose what they want to write. First, I’ll write the model, and then we’ll write it together while I hold their brush. Many people want to bring their work home as a souvenir.
O: What are some of your plans for your calligraphy classroom in the future?
S: I’m going to start offering a vacation rental very soon, and visitors who stay there will be able to learn calligraphy if they want.
O: Our program is called “The Will of a Proprietor,” so can I ask about your “will” behind running a calligraphy class?
S: Actually, the original reason I started teaching calligraphy to foreign students was because of my English class. I always wanted study abroad students to come to my English class for things like Halloween and Christmas, but I felt it’s such a shame just to say goodbye afterwards. I thought about how to maintain contact, I realized that I could also offer to teach them calligraphy.
O: You showed me a little bit before, but could you explain about using smart phones and tablets going forward?
S: Well, on smart phone there’s the Zen Brush app, and of course you can write on tablets. It’s very easy.
O: Who do you want to use this feature?
S: Many retired men don’t have any hobbies and will just hole up inside their house. I think that calligraphy is a really easy hobby to get into, and it’s even easier if you’re doing it on your smartphone or tablet.
O: How will any interested students be able to reach you?
S: On my Facebook!
O: I saw your Facebook page, and there were many photos and videos including ones of foreign students. It looks like a great place to share what you’re doing with more and more people.
S: Thank you!
O: I also heard that you’re reaching out to elderly people with your calligraphy lessons.
S: Yes, I think it’s a great tool way to prevent dementia. There is very little dementia among elderly people who practice calligraphy, and I actually read about how it engages both your mind and hands and can keep your brain fit.
O: You use both your hands and your mind to write calligraphy, huh.
S: It’s not just about copying what the teacher does, but writing the way you want, and feeling that sense of joy when you share what you made with your friends or grandchildren. Calligraphy is a kind of art therapy.
O: It looks like you will have more and more elderly students hoping to prevent dementia, as well as more and more foreign students learning to write calligraphy. I wish for your continued success! Thank you for the interview.
S: Thank you!
After the interview, she said that she followed in the footsteps of Tsuda College where she graduated from.
Their motto is “Be an all-around woman.” It means you shouldn’t be satisfied with being good wives and mothers but also contribute to changing the world for the better.
This gave her the idea to bring retired people from their homes to communicate through calligraphy.
She is also making an effort to bring the world together in line with the motto of Sophia University from which her son graduated. She accomplishes this through English-language calligraphy lessons with the help of IT. How great it must be to build relationships across different cultures and age-groups! 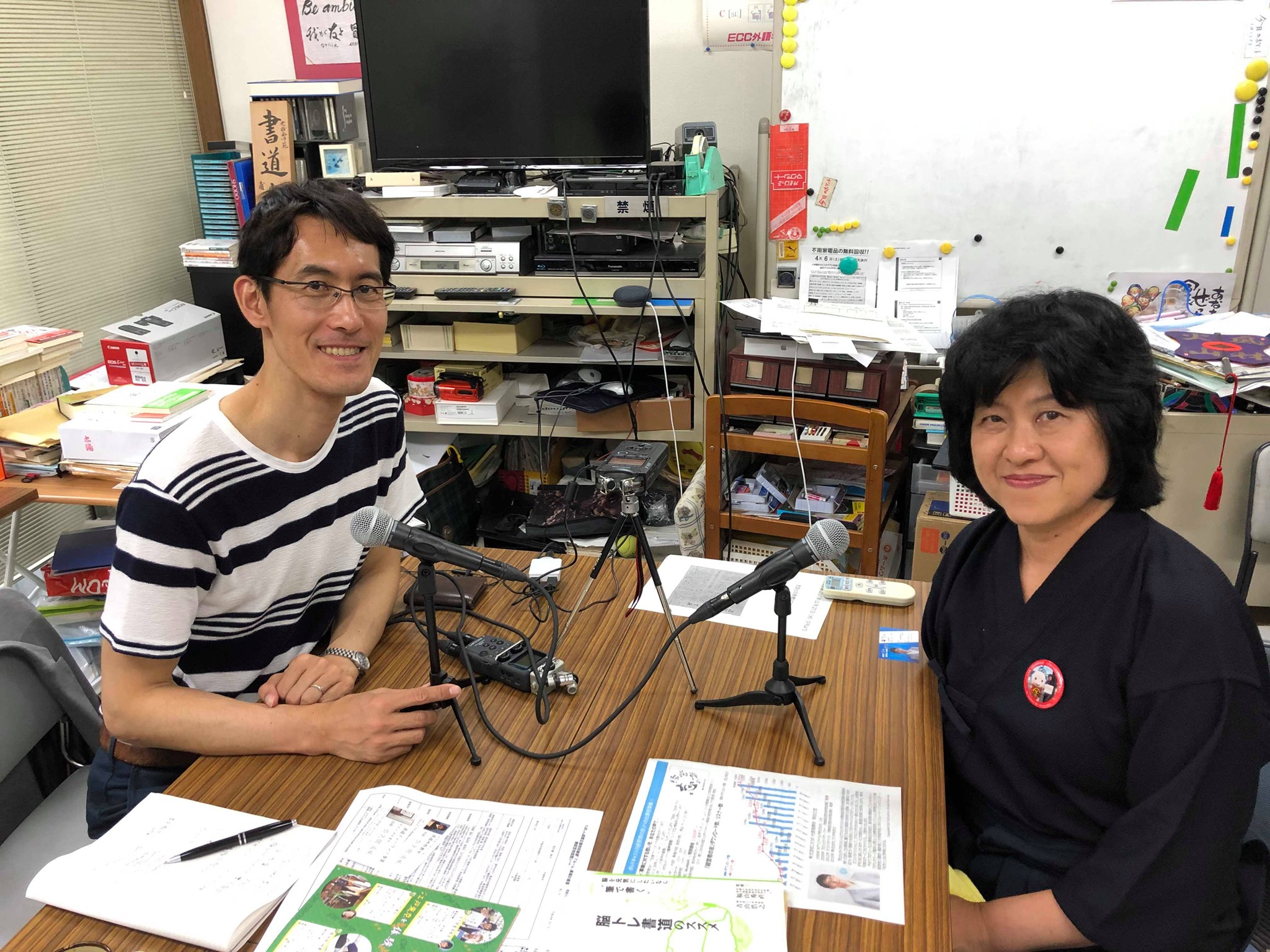 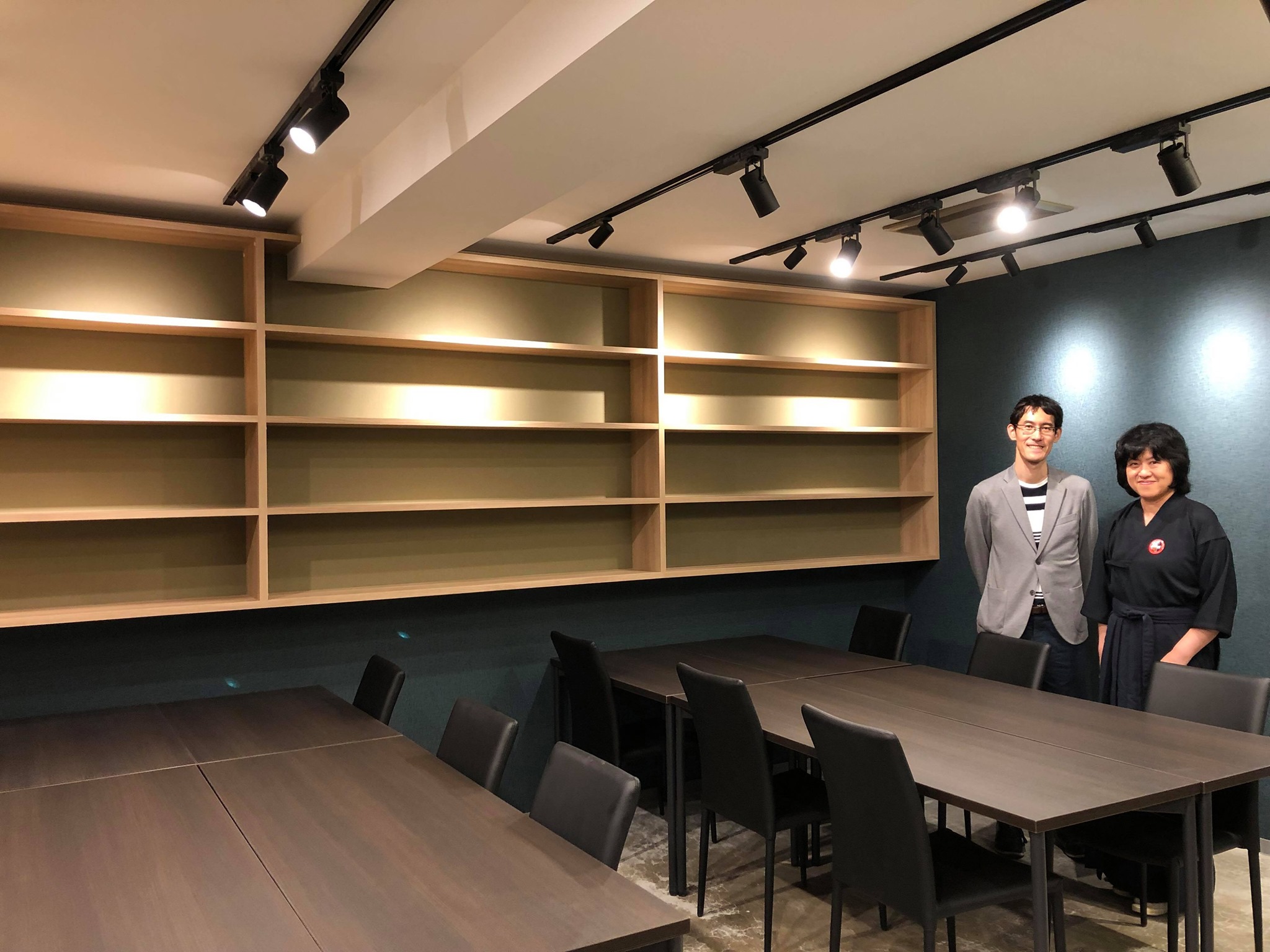 Sam, my student of calligraphy wrote ‘Ryo’ (cool weather) on the fan.